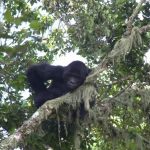 The fate of Virunga’s eastern lowland Grauer’s gorillas continues to hang in the balance. In 2008, their population was a mere 22 individuals and today that number stands at six. The remaining six are comprised of a habituated group of four and a group of two – an adult female and a silverback. Virunga’s Chief