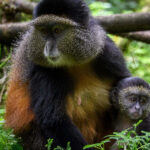 Mountain gorillas are critically endangered species that occupy the mountainous and forested areas between 2200 and 4500 meters above sea level while the golden monkeys are endangered species that inhabit the highland areas especially within the Bamboo zones of Mgahinga National Park and Volcanoes National Park. Much as these two primates are very fascinating and tracking them is a once in a lifetime experience for every tourist, meeting face to face with the mountain gorillas is not an ordinary encounter but for the lucky ones only. Gorilla trekking offers an experience outside the ordinary and golden monkey tracking experience can never match up this great experience. What make the mountain gorillas even different and exceptional creatures from other gorilla species are the darker hairs on their skins. This allows them to thrive easily in these areas which is not possible for other gorilla species.

Therefore, much as golden monkey tracking and Mountain gorilla trekking are prime activities conducted within the Virunga Massif, these experiences can never be equivalent because one is more exciting than the other. To experience both of them, visit Mgahinga National Park of Uganda and Volcanoes National Park of Rwanda for unforgettable memories.