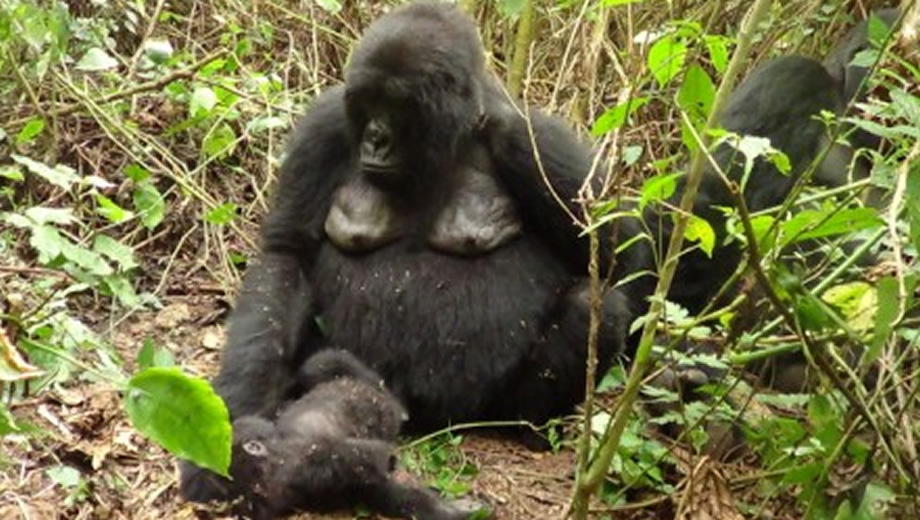 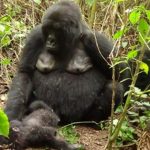 It is with sadness that I must report the death a Janja’s baby, Burungani. A week ago, we received news the Rugendo family was eating maize and sorghum crops outside the park near Sarambwe. Such behavior puts the mountain gorillas in grave danger of being injured or killed by angry villagers, so rangers from the Bukima patrol post headed out immediately to find them. When they located the family, the rangers noticed that Janja was carrying the lifeless body of her baby, Burungani. The rangers immediately contacted me at Rumangabo headquarters, but because of the late hour, I had to wait until the next morning to investigate.

The following morning, I headed to Bukima on a park motorcycle and made it there by 09:30. Together with a fellow ranger and a community volunteer (HUGO), I set out to find the Rugendo group. We walked for five hours before finally finding them at Mugogo. The first family members that we saw were silverback Kongomani and sub-adult Christmas. They were outside the park, feeding in a field of sorghum and maize, while the other four remained just inside the park boundary, apparently afraid to leave. When Kongomani and Christmas saw us, they too acted afraid and made a fast retreat back into the park. We calmly followed them and were eventually allowed to approach, but the family was acting uncharacteristically agitated. As the rangers had reported the previous day, Janja was still carrying her dead baby with her. No matter how many times one sees such a thing, it still difficult to witness. 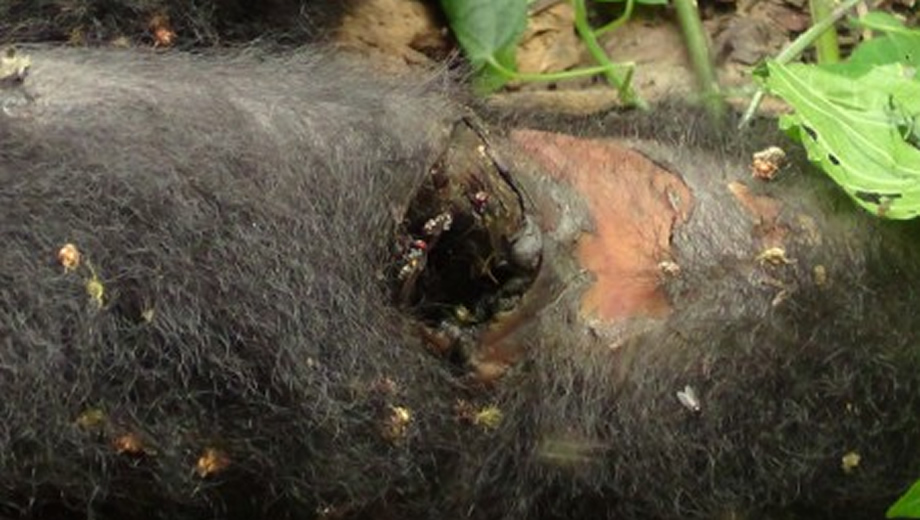 Determined to figure out why this baby died, we scanned the baby over and over again from a short distance away. Finally, when Janja repositioned herself we could see a deep wound on the baby’s arm. The wound was so deep one could see the bones in the baby’s elbow. We all came to the same terrible conclusion: this baby had  been attacked by people. Our best guess is that villagers were furious at the gorillas for pillaging their crops and assaulted them. It’s difficult to make sense of such a cruel act, but times are very hard and people will go to desperate lengths to protect their livelihoods. With the killing of the three buffalo and now this, there is reason to be alarmed. We simply must get an electric fence in place quickly to avoid such incidents in the future.

Baby Burungani was less than nine months old. Janja is still carrying him, but we expect she will come to terms with her loss soon. When she does, we will recover his body and the Gorilla Doctors will perform an autopsy.