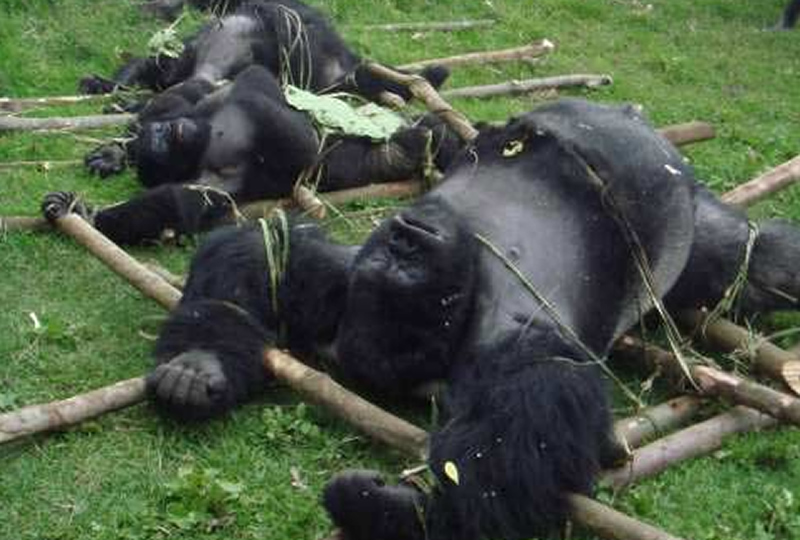 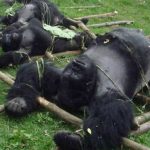 On the morning of 22 July 2007, Rangers in Virunga National Park found the bodies of 4 mountain gorillas killed in an execution style attack. The remains of another gorilla in the group were found 3 weeks later, with her infant missing, presumed dead. The images of the tragedy were broadcast across the globe and brought attention to the threats facing this critically endangered species.

In the 2 years since then, the war in Eastern DR Congo has raged and swept through the park. This time last year, the CNDP rebels controlled the Gorilla Sector of the park, excluding the Rangers of the Congolese Wildlife Authority ICCN from having access to the mountain gorillas that they had tracked for many years.

Late last year the Rangers finally regained access to the area and to the mountain gorillas, so this is the first time they can commemorate the date at the site of the killings. The gorilla family group with the surviving members of the 2007 attack was tracked this morning by Rangers and they are presently not far from the site of the massacre.

In order to mark the anniversary, Virunga National Park has launched the Senkwekwe Appeal, in honor of the silverback killed on that tragic day. The funds raised will go towards patrol rations for the Rangers protecting mountain gorillas and other wildlife through anti-poaching activities and fighting the charcoal trade which threatens the park.

The target for this appeal is $22,392 , which represents enough patrol rations for all the Rangers in the Southern Sector of the Park for 1 year. That is a cost of only $0.89 per Ranger per patrol day.

Contributions to the Senkwekwe Appeal can be made easily on our website: please go to www.gorillacd.org/how-to-donate/ . As always, the full amount of your donation (minus bank fees) will go straight to the field to help the Rangers and the gorillas.