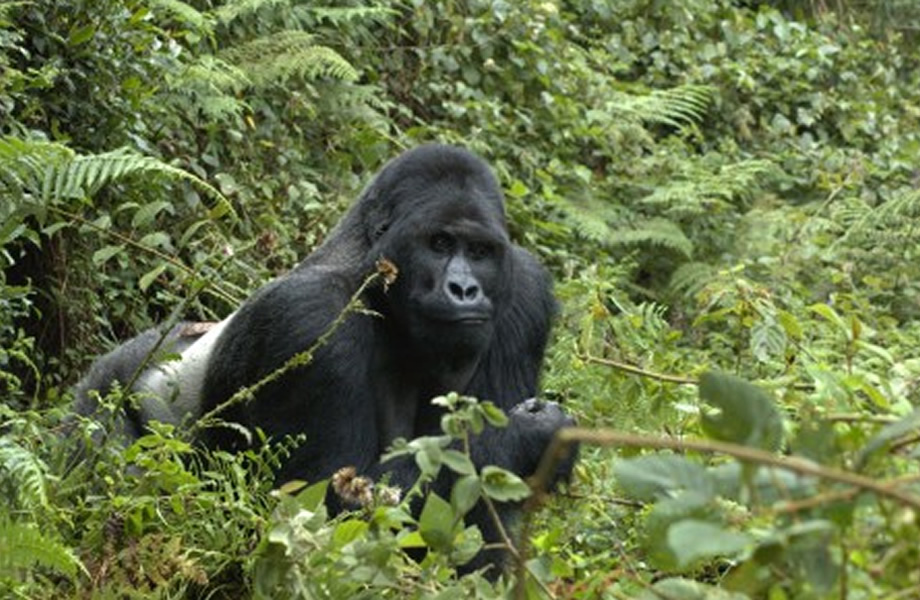 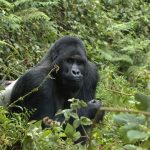 Virunga’s rangers and the Gorilla Doctors continue to closely monitor the park’s seven lowland gorillas living at Mt. Tsiaberimu. As some of you know, this small population is made up of two groups, Katsabara and Kipura, and their extremely low numbers put them at great risk of dying out. The birth of a baby in the non-habituated Katsabara group a few months back is a reason for hope, but they’re far from being a sustainable population. Rangers have increased their anti-poaching patrols and have cleared out an alarming number of snares to keep these gorillas out of harm’s way. Gorilla Doctors Martin Kabuyaya and Eddy Syaluha have been doing their part to ensure the gorillas stay disease-free and get treatment for any life-threatening wounds.

During this monthly check-up, the Kipura group was first to be visited. They were found only an hour away from the Burusi Patrol Post near the Kasalala river. When the rangers and Dr. Martin found them, they were calmly eating — silverback Tshongo under a tree and Mwasananinya only a few meters away from him. Kambula was also close by eating leaves, but Blackback Mukokya, who earlier in the summer was the unlucky subject of a skin biopsy, kept his distance. After about 45 minutes, Tshongo became agitated, which the rangers took as their signal to leave. From his vantage point, Dr. Martin concluded the group was in fine health.

The next day, the team headed out to visit the Katsabara group, which consists of a silverback male, adult female, and a baby. Silverback Katsabara has never been habituated to the presence of humans, so he is very protective and maintains a lot of distance between the rangers and Gorilla Doctors when they try to check in on his family. On this occasion, rangers heard his powerful warning calls well in advance of locating the group. Heavy rains poured down as the team followed the sound of Katsabara.

As the rains let up, the team locked eyes with Katsabara, who was watching 100 meters away. To their surprise, he remained where he was and began eating. With the increase in protection of these gorillas, it’s possible that Katasabara is starting to trust the rangers. Only time will tell. The team never did get a look at female Mwengeshali or her baby, but if Katsabara’s calm was any indication, they are doing just fine.