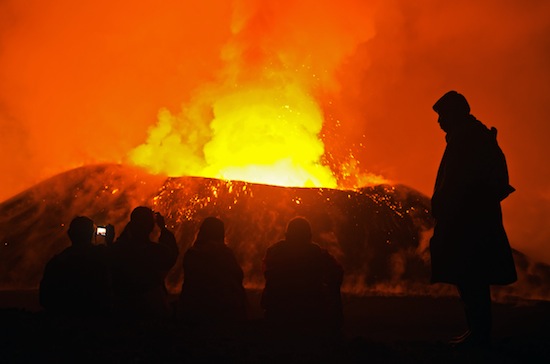 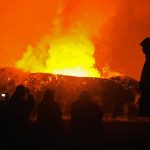 On the evening of 6 November, Nyamulagira volcano erupted in a spectacular display of fire, ash, and lava, lighting up the sky in bright orange. By day five, warden Emmanuel de Merode, and Tourism Director Cai Tjeenk Willink had organized a new trek for tourists to the eruption site following a safety approval from volcanologist Dario Tedesco with the Goma Volcanological Observatory (OVG).

The same week, the park sent out a press release about the new trek and was picked up world-wide by over 200 news organizations in both print and on the web. The BBC, AFP, Corbis, AP, and others sent news crews and photographers to cover the eruption trek story.

Tourism numbers for the two weeks following the trek announcement shot up for not only the eruption trek, but gorilla and volcano treks as well. In one week, over 130 people visited the park, an absolute record for the low season.

The trek takes visitors into a campsite approximately 1.5 km from the erupting volcano, but they are allowed to walk as close as 500 meters with a ranger escort.

Virunga National Park, with the help of the European Union, has driven a major effort to relaunch tourism in Eastern Congo over the past two years. Access to volcanic eruptions has never been offered to visitors before.