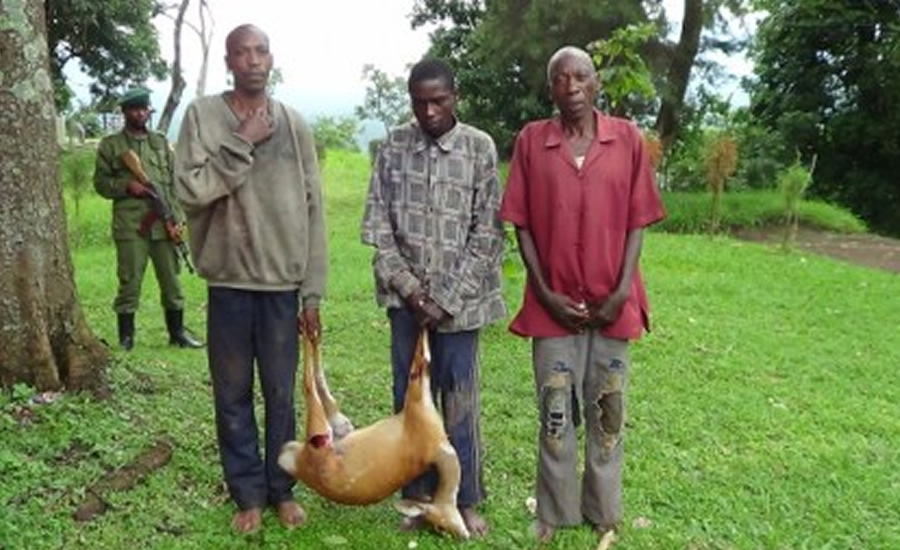 Virunga’s Head Warden of the Southern Sector, Innocent Mburanumwe, recently received a tip from someone in the Biruma sector of the park (7 km from Virunga HQ in Rumangabo) that three individuals were illegally hunting bushbuck with their dogs. Despite the insecurity caused by the presence of FDLR (who’s command structure is made up of those who led the 1994 genocide in Rwanda), Innocent dispatched a group of rangers to apprehend the suspects. By the time rangers arrived on scene, one bushbuck had already been killed, but the men were arrested before they were able to kill again.

When caught in the act, as these poachers were, requiring them to bury the animal is part of the education process

Rangers then transported the poachers back to Rumangabo where they were directed to bury the dead bushbuck. The poachers spent the next 48 hours in the Rumangabo prison. While in custody, the poachers were educated about why they should respect the rules against poaching Virunga’s protected wildlife. Typically, no fines are levied against such poachers because they have no way of paying them. Education and two days in a cell is really the only option for such poachers. Repeat offenders, however, can end up in Goma prison, which is known to be a difficult place to endure.